We are super excited about being awarded the “New Project Track” funding from GOSH’s 2022 Collaborative Development Program! (Round 1). You can find our application here.

We have also been awarded funding for phase 2 of the CDP (links: application and results). 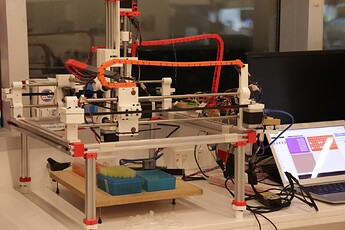 Meet our prototype robot! Demo videos available at the repo.

In this post we include the info and links to most relevant aspects of the project, and hope to encourage participation from the GOSH community

Our team for this phase of the project gathers skills on molecular biology, engineering and chemistry.

Open calls for new collaborations will be posted in this forum and social media, and will focus mainly on two hardware aspects:

It will happen mainly on two GitLab repositoies under a common group:

We are commited to produce:

We are super interested in hearing your ideas, constructive criticism and whatnot.

We’ll post updates as soon as they are available!

Hi folks,
this looks really cool! Really nice repo readme as well, it will look great when things are complete

I have to ask, sorry, what was the rationale for starting such a project from zero, given that there are other robotic pipetting platforms out there? I mean, why not take what is available from OpenTrons and remix to what you need/add to it? Wouldn’t this save you time and effort?

Also, this might be a nice information to add to your readme? As in, why you are creating this?

Those are good questions! I have long answers.

In short: it might be an open project, but without free documentation it simply falls short. And it is expensive.

The main justification of our project is to make a robot we can actually buy or make. By that I mean that 5000 USD for an OT2 is still too much (I cant save that money, for example), and importing an OT2 to Argentina is a nightmare.

Also, it is a marvelous time to make pipetting robots, and there are many advanced open-source lab automation projects out there. Each of them must have had a different reason to not make or purchase an OT2, I’ll share a list of known projects when I find the time.

You can have a look at Pipette Jockey’s blog post on making an OT2 compatible bot, and his 1 hour video on the subject. I must say that he had all of those problems even with OT’s help.

From his video and my own experience, I gather that making an OT2 would not have saved me time (nor money, at the time I spent 300 USD making my prototype).

Even though it is open source, the OT2 documentation is far from thorough. You might start here, or at their repo, and get nowhere near build instructions, or even a bill of materials (there is one available for the OT1, but that’s about it).

Of course there is always the possibility that I have not found the good docs.

What we won’t do from scratch

The main thing that we really could have, and probably will use, from the OT2 project is its software. That repo has better documentation, but at the time writing a simple UI was more feasible and fun than facing an unknown number of surprises adapting OT2’s software.

And both things are related to the more general case: enabling more people.

Indeed this would look nice on the readme. But I would probably leave the OT2 stuff aside, I wouldn’t want it to be based on criticizing another project. Right?

Thanks for making me write it

Thanks for the long answers!!! Makes total sense and it is a bit of a pitty to hear that documentation on some of these projects is not as good as they could/should be… Good luck with your project!

I would like to be part of the effort too. We presented a project with similar capabilities too that wasn’t selected, but I feel there’s a lot of room for improvement in open source Pipettors or any other liquid handling devices. Our idea is to add different sensors and other capabilities using the liquid handling platform but not necessarily focusing exclusively on the pipettor platform. Perhaps its objectives weren’t understood and its reviewers might have got the wrong impression in our case.

I agree that OpenTrons is not an option for DIYBio Makers or even in developing countries’ research departments. The price of 5K in many cases, represents the entire budget for a year at a university lab in Latin America or elsewhere in the periphery. I feel that sometimes many leaders in OpenSource from the Global North are not sensitive to those realities. A reconfigurable liquid handling robot (or any other OSHW) should be adaptable and scalable either by expanding its capabilities or downsizing its configuration depending on the demand.

In my very personal perception, OSHW is absolutely useless if it can not be customized or adapted to the social context of the final users, and should not just be constrained by the choices offered by the academic or commercial licenses, but probably many will find my statement incendiary. We could start a debate about the existing OSHW licenses, the technology transfer process from north to south, the lack of regulations in some regions, etc. I bet there are appropriate spaces for that.

I would not go as far as saying that OpenTron documentation is not good. They are actually one of the very few that stayed true to their belief and published docs after they made it big.

It’s just that the number of parts and complexity is large enough to make it quite a daunting task even with the documentation.

Alex (PipetteJockey) was also right and he’s an exceptionally smart and talented cookie when it comes to devices and molecular biology.
As for the rest of “OpenSource” there are many significant issues and the documentation in usually not the biggest issue.

Hi Adrian and David! I’d be súper glad to work with you. Give me a couple days and I’ll respond properly. Thanks for writing

Hi David and Adrian, I’ve been really busy; I apologize for taking so long to respond.

I’d be really interested in learning more about Proteopresso, and the lessons learnt during development.

You are súper welcome to participate in all ways. If there an aspect of the project you are more interested in perhaps we could start from there. Please let me know!

I’m slowly advancing on all fronts. For now adding Jubilee’s tool-changer and writing documentation are the top priorities (though I’ve only purchased the parts for now).

By what I wrote about OT I meant only to share my criticism (or possible points of improvement), gathered from my own context and experience. I never meant to say that OT’s documentation is good or bad, only that it is insufficient relative to my need.

As for the rest of “OpenSource” there are many significant issues and the documentation in usually not the biggest issue.

Indeed documentation is not the biggest immediate concern in open source, but I was hoping to try it the other way around this time. The pipetting-bot project is my biggest experience on open source hardware so far, so I would really like to hear your thoughts on how to do it better

Alex (PipetteJockey) was also right and he’s an exceptionally smart and talented cookie when it comes to devices and molecular biology.

Nico, Yes I met Alex. He worked on one of my projects. That was before he deflected to the Dark Side.

Yes, I was a really please meeting / working with Alex, he helped us a lot with the design of some DNA constructs and the implementation of our early bioreactor prototypes. Definitely, it was a pleasure learning from him. Unfortunately, he is no longer in the DIYBio ecosystem.

You can see a bit more about our development of the proteopresso at the Glyxon website (www.glyxonbiolabs.com). I know it’s a bit incomplete and still working on the Github site. I’ve been a bit busy with other projects/jobs but I will have more time this summer to complete them. We have 2 approaches so far 1 is using a development card (Raspberry pi CM4) and accessory hats/ drivers and 2 we have developed our own PCB for controlling the basic functions of the protepresso. If you feel like you would like to know more, we can have a 1:1 call, that we can arrange. I’m personally working on the pipetting volume selector and using other accessory parts that will enable the Proteopresso for cell harvesting, non-chemical cell lysis, and other perks (object recognition, object sorting etc).

More than a simple fraction collector, Proteopresso is intended to become a platform for several applications, some of which have already been tested.

I will be happy to contribute