There are a number of groups I’m working with on research projects for open hardware and open biology for diagnostic testing, in light of COVID but also developing tests for diseases like typhoid with partners at MboaLab in Cameroon and elsewhere.

A stumbling block that is hitting detection hardware across several projects is photodiode circuit design, basically we do not have the right skillset to tackle this professionally and it’s a blocker!

One specific device with a high priority issue outstanding is Miriam, an open-source instrument for isothermal amplification reactions such as LAMP and realtime fluorescence detection. It would be super-helpful across a range of projects. 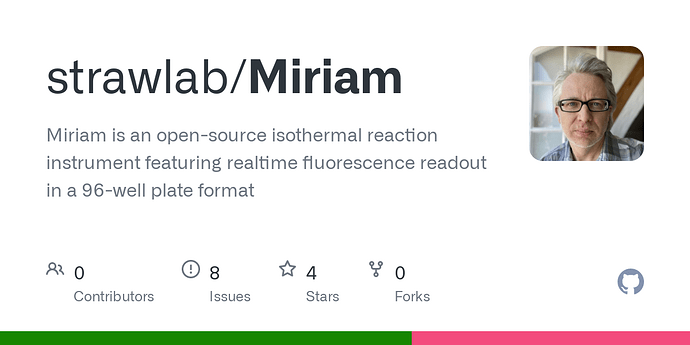 Andrew Straw’s lab (https://strawlab.org/) at the University of Freiburg have been fixing up some of the outstanding design issues but they’ve hit a roadblock on this one:

Miriam was designed to be simple and inexpensive. As far as this affects the pho…todiode circuit, we could investigate several things to achieve higher sensitivity and lower noise: - investigate alternative detectors with better performance - redesign the transimpedance amplification to have high sensitivity and low noise - investigate high performance analog to digital conversion All of these would presumably increase complexity and cost, but may make the device useful for experiments with no amplification step such as fluorescence hybridization.

Would anyone have the expertise to help out with this? You’d be assisting a network of at least a dozen research labs working on low-cost and open biology, with the potential for this to be useful for many more.

I’ve been playing around a bit with the TI OPT101 which is a monolithic photodiode/transimpedance amplifier for ~$20 that might be a good fit. I also know some people with expertise in this area, but need more details (already posted to that github message).

I would suggest TSL257 which is a high-sensitivity low-noise light-to-voltage optical converter that combines a photodiode and a transimpedance amplifier on a single monolithic CMOS integrated circuit. This is cheaper than than OPT101. Challenge is getting them in good quantity. RS stocks them regularly.

The surface mount package for the TSL257 looks to be widely available. The VEML7700 also looks good and has a digital/i2c interface (Adafruit sells a breakout board for $5). Agree with @scientist that it’s worth looking at alternatives to the OPT101 which has been sitting in my parts bin for ages and may not be the latest/greatest

If we have to go with i2c, I think Si114x range of sensors are cheap and widely used in the wearable devices. We tested this sensor extensively for measuring bacterial growth monitoring, so I would say that this is suitable, low-cost and Arduino libraries are widely available. 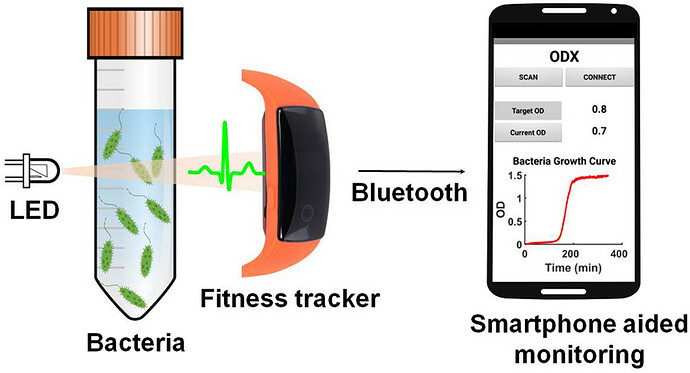 Continuous monitoring of bacterial growth in aqueous media is a crucial process in academic research as well as in the biotechnology industry. Bacterial growth is usually monitored by measuring the optical density of bacteria in liquid media, using...