I met Ben Paffhausen in Berlin early this year (see another post about an intro to hw from him. Ben is a biologist at the Institut für Biologie /Neurobiologie at the Freie Universität, and has been working on a fascinating bee experiment where he is studying their behavior via an artificial flower he has constructed. “The artificial flower is a feeding device for honey bees built with open source hardware and software.” I promised Ben that if he writes up his work, I would present it at GOSH (he will be busy at the OSC conference in Berlin right at the time of GOSH here in Santiago). So he did, and now you all can learn more about Ben’s very interesting work: 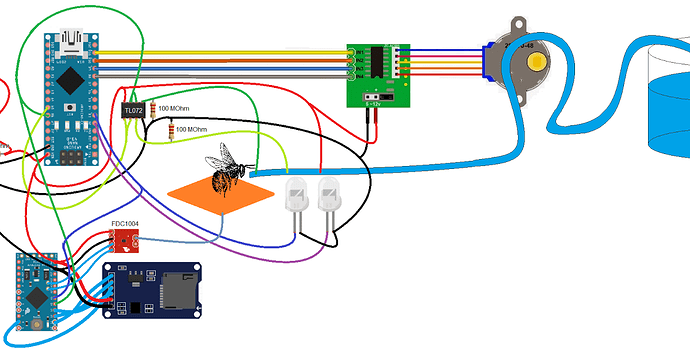 This is a relatively advanced level project, but it may be something that one may want to replicate and build upon. It also requires modding the honey bee itself (via the use of electrodes that measure its responses), so it has some bioethics component to the experiment and may not be for the squeamish or gentle ones (I, for one, can’t think of bringing myself to install electrodes in a wee bee even though the bee may or may not care). As I said, an advanced experiment with lots of mature supervision required.